Getting the farm house decorated for Christmas..I think it's too late to put lights up out side, far too cold.  But we can do the inside of the house.  Or at least I can. I am on my own with this one. Scott, my husband is not fond of this holiday.  It's too commercialized for him. But I love the whole experience.
I still can't believe we live on a farm, and how it all came to be. This was not a planned occurrence, at least not on our part. I think the universe has a hand in it.  I have wanted to live on a farm for most of my life. But four years ago I went to visit my Soul sister Rosa, in Virginia, it was then that I fell in love with the idea of living on a farm. That combined with my passion for knitting and natural fibers, I toured farms in Virginia.  From there I continued on my quest for info on raising Alpaca and discovered that people living on a farm have a very fulfilled and more organic way of living. I have read Mother Earth News Magazine, and found it fascinating enough to spend time day dreaming about living on a farm. I even bought dishes and furniture that would be appropriate on a farm, can you say O.C.D. ? I was working on my Positive Thought Projection, "If you Visualize it, It will Come" right?  I placed pictures of a farm up everywhere, even knit a rug or two just for that purpose. I must inform you that I lived in Arizona at the time. Knitting scarves fit for a polar bear, and imagining that one day I will live on a farm, knit and design for a living, and one day......have Alpaca of my very own!
Thats was four years ago, although I left the pictures up, and continued knitting and designing, my layoff from work as a bookkeeper and subsequent quest for financial survival took precedence over the next few years. I still had many lessons to learn.
Several moves later, when I finally left my comfortable familiar community and braved it out in the Big bad world that my life has made amazing changes.  I let go control, and constantly fighting to make life go according to my plan.  I opened my eyes and my heart to enjoy lifes moments and the wonderful people that occupy it. Almost with lightening speed I have been heading in all the directions that took me here.  It's been a crazy journey, full of spiritual enlightenment and love. And I have never been happier in my life.
Scott was transfered to Iowa for employment and given a short notice, which was moved up to a two week notice. It was a fast move, with no where to move to.  Scott was out of town already working at his new position while I was back in Phoenix getting ready for the move.  He was busy with work and spending any off time looking for a house to rent for us, two teenage boys, four cats and a ball python snake. LOL...Thats a tall order!  We were running out of time and still had to make the journey across the states (four days) to get there. One of the ads we called was for a brick house on a cattle farm. Scott was due to come home the next day and no one else called us back, so he went to meet farmer Larry ( I didn't know his full name) and looked at the house. It was a bit of a drive but workable, it was our backup plan.
Posted by 365 Days On A Farm at 1:53 PM 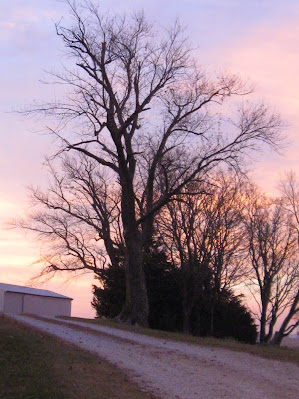 Promote Your Page Too

Read my interview on Whohub
Ask my opinion about something: